There is sad news, Negrette died. I got a call the morning February 12 to say that she was lying on the ground and couldn’t get up. I went right away to the pasture and called a veterinarian. He said Negrette had hyperthermia after  spending many hours on the frozen ground during the night. The farmer who lent the pasture brought  some straw to make a bed in the shelter and we put  Negrette there and treated her for hypothermia.  Next day she was back to normal temperature but she still didn’t have the strength to get up. 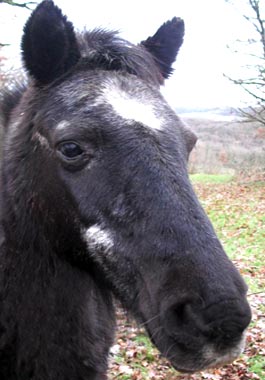 It is very difficult with horses in a situation like this to know what is the cause of their suffering, since unlike cats and dogs not so easy to take them in for x rays and tests. According to the vet when an aging horsecan’t get up from the ground it is usually the end.The veterinarian said to wait 2 days and if she still can’t get up she should be euthanized. Horses are not made to lie flat on their side for very long and it starts to cause internal damage after several days.I stayed with her giving her food and water and massages, hoping she would rebound. But I wasn’t alone, her friend and companion Blanchette was there by her side.   Negrette was totally conscious and she moved her legs as if she was running...was this a sign of pain?  So hard to know with animals. But to be sure she wasn’t suffering too much I gave her pain medication. After I called the vet to come euthanize her, I spent the next day giving her her favorite things to eat, the things she loved but normally wasn’t allowed much like carrots apples and bread. I brushed her and caressed her so that her passage would be full of love and tenderness.That evening under a full moon Negrette found the strength to pull her head up enough so she could touch noses with Blanchette. I felt privileged to witness this  beautiful and touching moment saying farewell.The next day the vet came and Negrette passed peacefully. Blanchette stayed next to her body for a long time. Suddenly she started to make a high pitched loud cry and she ran around the pasture in every direction in clear expression of distress. Poor Blanchette , it is the first time in her life she is alone. I cried with her...we had both lost a good friend.  But it really it was  Blanchette who was suffering the most now.  She would  be needing a lot of my attention and care now.
Posted by Jeannine Edelblut at 4:45 AM