The Return of Scipion

With the arrival of Scipion the problem of finding a companion for Blanchette was resolved. But Scipion arrived in very bad health, hardly able to walk, lack of energy and  hoofs in terrible  condition. Furthermore he had horse shoes on the front feet and the farrier could only remove one of them because an abscess on one foot was so painful that the farrier couldn’t touch it. 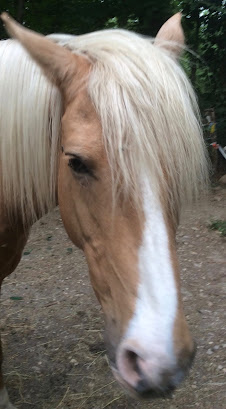 I had a suspicion that he had one or more tick borne diseases because of a lack of proper care. A few years ago I visited him at his adoptive home and found him totally infested with ticks. I was horrified and asked the woman how this had happened. Her response was that she didn’t like touching ticks!  I was upset and worried but the woman said she would treat the ticks with a toxin called Botox here in France.  Better than nothing and probably too late but there was nothing I could do myself.In any case at his recent arrival back into my care he had no ticks. But he did have signs of possible tick disease, so the veterinarian came and took blood samples to send to the lab. The result was a strong positive for 3 out of 4 tick borne diseases Lyme included.The effective treatment for Lyme with horses is especially expensive and difficult. It requires a strong antibiotic to be injected into the vein every day for ten days. This is no easy task given a horse who is not willing to let this be done without resistance. For the cost I had the very good luck to get a donation of 1000 euros to cover the medical expenses. What a godsend for this horse because otherwise I could not pay for that myself without help.The Lyme treatment was finished end of July 2019 and Scipion showed marked improvement afterward. We had a setback a few weeks later when he started limping because of a bout of laminitis, a problem he will always be prone to because of his past before he was rescued. He responded well to the laminitis treatment and after a few weeks he was able to walk without limping. As autumn came with cooler weather he started doing really well and throughout the winter he was trotting and galloping like a normal horse. Nevertheless the  maladies and negligence of his past have left physical damage and he will always be at risk for health problems, especially laminitis.
Posted by Jeannine Edelblut at 5:20 AM