H3H is now a Refuge

The Helping 3 Horses Association has evolved. What was once an effort to rescue three horses is now an effort to create a  refuge for two.  It has been over a year since my last post where I shared the story of Scipion's adoption.  During that year  I  moved (again!)  closer to Toulouse after finding  an old farmhouse to rent with land for the horses.  This house is less than ideal for me  (in bad condition, too expensive, and impossible to heat), but it is good for Blanchette and Negrette because there is 5 acres of flat pasture with a section of woods for shade.. So began a new chapter of creating  a small refuge for the two remaining horses. 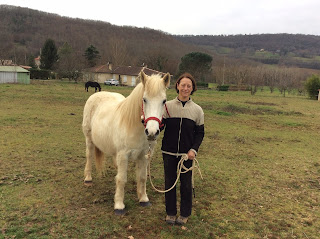 There are several reasons why I decided it would be ideal for Blanchette and Negrette to live in a small refuge just the two of them rather than living at an existing refuge in a herd, if they could even get into the existing refuges which  have long waiting lists.  I  learned from boarding them where they were pastured with a group of 6 other horses,  that Negrette is badly treated by other horses when she is in a  group.  Negrette is small and totally non-aggressive, and so she gets kicked and bit a lot by other not-so-nice horses who want to show they are above her  in the herd hierarchy.  For Negrette stress is  factor that exacerbates the allergic dermatitis.   On the other hand, Blanchette  will act aggressively to defend herself when she is in a herd,  but she often seemed agitated by this need to defend her position since she is not a large horse either.  Another problem is that it can be difficult to give them individual attention in this kind of group situation. It was tricky for me to care for and work with them individually because other horses would get jealous and try to interfere, and the presence of the other horses made Blanchettte and Negrette nervous.  Because of Negrette's allergic dermatitis, she needs  ongoing treatment and special care. Not just to treat the lesions but also to provide protection from the insects that cause her allergic reaction.. For example this last Summer/Fall  I was able to place fly masks during the hours of highest insect activity and then to remove the masks for rain and at night...the fly masks can't just be left on day and night without any monitoring,   As for Blanchette, she  still needs individual attention when it comes to hoof maintenance and other training issues.   Finally these two mares have a strong bond and they  live so peacefully  together as a pair.  I wasn't keen to mess up a good thing.  Their bond with me,  is a factor as well. So began the chapter of the H3H Association horse refuge.
Posted by Jeannine Edelblut at 12:52 PM