News, and a Matching Funds Challenge

There's lots of news about the horse rescue. The problems with Scipion's foot are still a concern. He improved after arriving at Marine and David's stable but he still continued to limp on and off and so an appointment with a veterinarian and the farrier was organized. The veterinarian diagnosed an abscess in the hoof,  related to the laminitis, and so it was drained and he was given a shot of antibiotics. 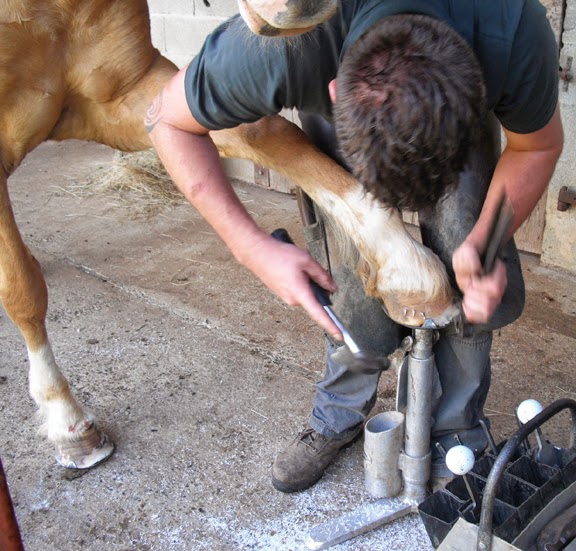 The vet also sedated Scipion so the farrier could do some major work to put horse shoes on the front feet, a sort of prosthesis to stabilize the bad hoof. It was still too early in Scipion’s training to ensure that this work could be done safely without sedation. He was quite a sleepy boy and didn't notice when my friend  Ellynne braided his mane. His hoof was looking pretty bad to me but afterwards he was clearly feeling less pain and was able to  walk without limping. This allowed him to start his training sessions with the horse trainer. 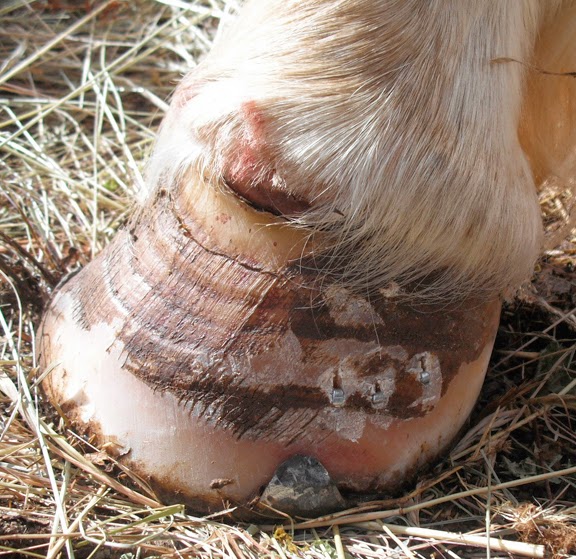 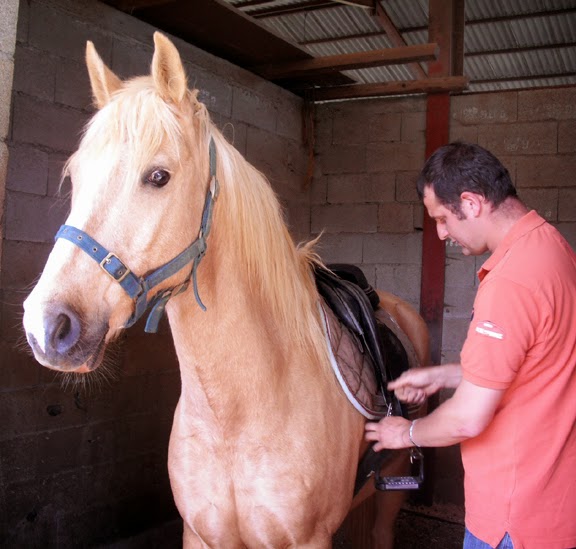 Scipion has proven himself to be as intelligent and eager to learn as I imagined.  He easily advanced at each stage of the training. Scipion seems happy and excited each time he is readied for a training session. I was amazed at how fast he progressed, first working on the training rope, then accepting the saddle blanket and belt without any negative reaction at all. 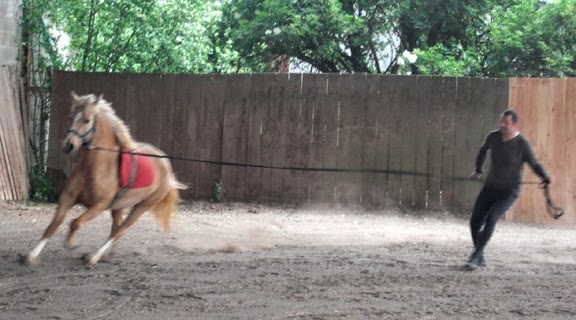 Next he was fine with the saddle and finally he showed no fear at being mounted. I had been trying to prepare him for this by putting my weight on his back and also by climbing up on a low rock wall and setting my leg on his back..he never showed any fear when I did these things and this fearlessness always impressed me and convinced me he could become a good saddle horse.

But we are very worried about his front right foot. He continues to limp a bit and so his training sessions are light. It has been decided that he must have an x-ray to see if the problems from his previous neglect have caused permanent damage so that he will be handicapped for life . This would mean he could never be ridden for more than very short promenades. It also means that the potential permanent owner who is interested in him would not be willing to take him if this is the case.

Now some news about Blanchette and Negrette.  In mid-May I was busy trying to figure out where they could go since the temporary boarding situation I had found for April and May was not a good one for several reasons. Firstly, it was simply not affordable and the facilities were not up to the price. The pasture was difficult for them because it was on a steep hill with no flat areas and an uneven surface to the land, making it hard to run.  Also there wasn't a smaller enclosure next to the pasture to take them for training. and care, making it impossible to provide either since there were other horses in the pasture as well who interfered. Moreover I could feel that Blanchette especially was not happy. She hadn't bonded with any of the other horses there and acted stressed when they approached her. Maybe she was having back painbecause of the steep slope; the veterinarian had said he thought she had some back problems.

At first I thought it would be good to try and separate Blanchette and Negrette since I thought maybe I would end up keeping Negrette, that no one would want to deal with her terrible skin allergies. It seemed possible maybe I could handle the cost of one horse without help, but definitely not two. So I decided to put Negrette in boarding situation recommended by Marine and I tried putting Blanchette elsewhere with a woman who offered to keep her for a few months at no cost.

Well that didn't work.  Blanchette was very unhappy. Bad enough being separated from her son, Scipion, and then add the trauma of going in a trailer for the first time (it took two hours to get her to go in). 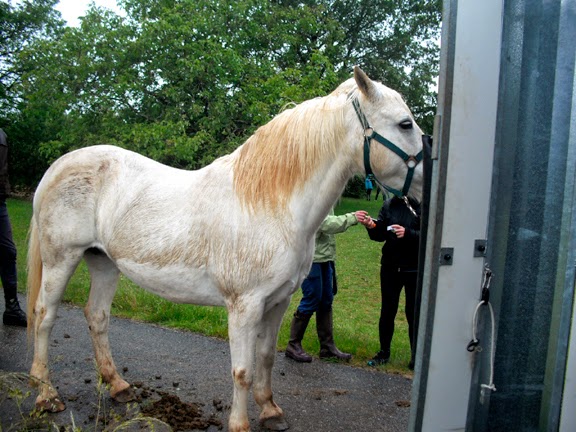 But also to be separated, so soon after Scipion, from the last remaining member of her family, her good friend Negrette. Poor Blanchette was so upset, and acted out very aggressively towards the other horses owned by the woman.  In the end we decided to reunite her with Negrette. Another factor in my decision was that realized what a great  situation it is, the place is where we put Negrette. The owners are a very sweet older couple who do this more out of love for horses than love of money. They asked only 60 euros per horse per month. This is very inexpensive especially considering the high quality of the facilities. It is a paradise for horses, an enormous area of flat land with trails going into the woods, an open barn for shelter, and an area where one can easily take out the horses for training and care.(Blanchette still needs more training for hoof maintenance and Negrette needs health care on a regular basis.) Plus the owners give a lot of loving attention to the horses who are boarded with them. So Marine and David kindly volunteered to transport Blanchette again. This time it  took just an hour and a half to get her into the trailer, but when she came out 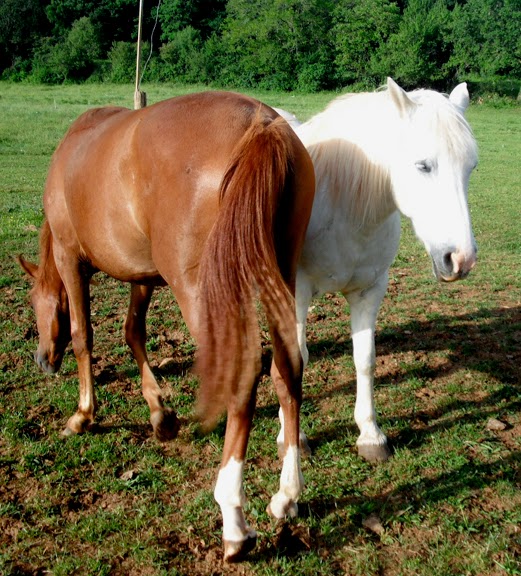 it was like she had arrived in paradise. Negrette was there, and also everything a horse could want, including other friendly mares, one with a foal, and Blanchette quickly made friends with the other "moms". 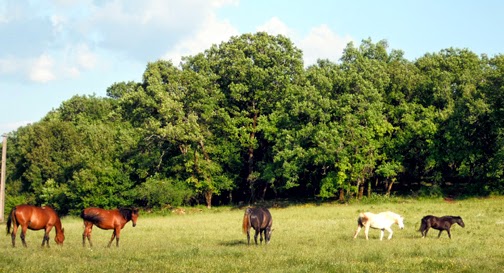 It is nice to watch horses in a place where they can run. When Blanchette arrived she and Negrette ran for sheer joy. Negrette is in heaven too because she has always liked being in the woods and that's where one can usually find her now, being the independent soul that she sometimes is, or maybe it's just that in the shade of the woods she suffers a bit less from the heat, the insects and her allergies.

Marine and David think that Blanchette and Negrette are too old to do more than retire peacefully and that this is the ideal place for them to live out their life.  Sounds good..only problem is the ongoing cost to the Helping 3 Horses Association.  I had intended from the beginning to find new owners to take on the financial responsibilities for all three horses. 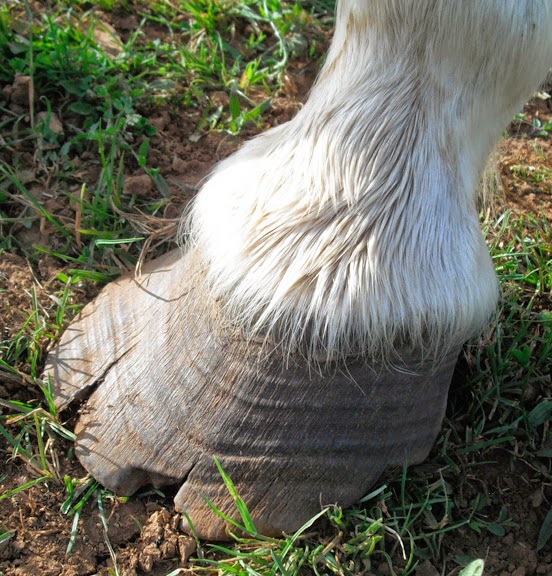 Not only is there the boarding cost but also the ongoing cost of hoof maintenance.  It has been 4 months since the last time their hoofs were cared for and already Blanchette is really needing to see the farrier who is scheduled to come this week.  As I explained earlier, because of the years of past neglect they will need to have hoof maintenance more often than usual. That costs about 40 euros per horse depending on the fees of the farrier.

After some thought I have decided for the time being to let Blanchette and Negrette stay where they are since they are so happy there; I believe it is best for their well being at this time and my horsewise friends have said it would ideal for them to have a period of stability with minimal stress.  Hopefully I can raise enough money to cover the costs of supporting their happiness and well being in this horse paradise for a period of time. It's rare for horses to have it so good;  most people don't have as much land for the horses they own and so the horses are often  kept in small enclosures with only occasional outings to stretch their legs. It would be hard for me to feel good about passing them on to new owners if it meant they would have to live all the time in small enclosures like that. Personally I think that after all the years that they suffered from neglect as living lawn mowers of the previous owner's small fields,  it seems a nice bit of poetic justice that they can now live such a good life with lots of love and care as well.  Only thing missing to make it perfect would be a protective shelter for Negrette during the summer months.

A bit more about Negrette and her special needs. In an ideal world Negrette could spend parts of the day in the summer months in an enclosed shelter where she could be protected from insect bites, which are worse at dawn and dusk. Or during the summer, she would have an electric enclosure where she would able to wear a protective covering without destroying it by rubbing on barbed wire and wooden fence posts. This is what is recommended by all the equine experts for horses with this kind of skin allergy.  Clearly this ideal has not materialized and may never materialize for Negrette. I am doing the best I can with the available resources, to wash her with antiseptic scrub, and to apply products to help give her some relief.  But despite my efforts she is really suffering as we go into the worse of the insect season. 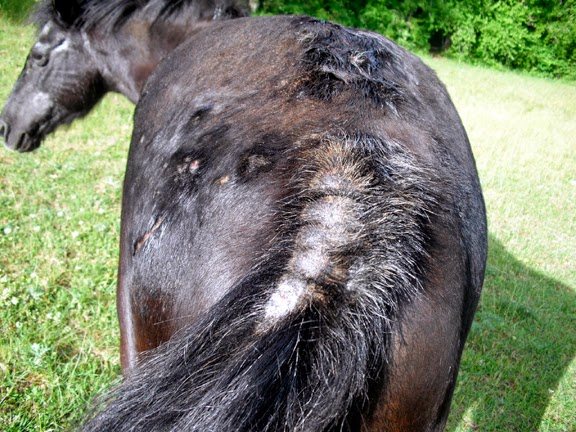 Now it is more difficult for me to give her the daily care she needs since she no longer is located so close by to where I live. Thankfully Natacha, my helper/volunteer, lives closer and so we are sharing the job of going to apply repellants that work for a bit, as well as healing and itch relieving lotions.  My pharmacist recently ordered a lotion for me called DermiteStop specifically for this kind of equine dermatitis. It does help but it is expensive, 27 euros a bottle.

Now you know where the Helping 3 Horses Association stands at this point.  The horses are  definitely being helped but we need more funds to continue at this time.  I am now trying to find the time and energy to do more fundraising. Happily a benefactor has recently come forward offering to match funds up to $1000. This means that now is an excellent time to make a donation,  since all donations will automatically be doubled.

Those of you who have already contributed can know that you have made a difference.
And don't forget that donations are tax deductible; Helping 3 Horses is an official French non-profit association.

Posted by Jeannine Edelblut at 9:29 AM