I haven't  posted for awhile because of my trip to the US which occupied me for most of April. So now it's  time to fill you in on the big events since my last post. One event happened at the end of March, the date agreed upon with the previous owner when the horses would leave his property. I had found a place where they could be boarded that was close to their previous location. The cost of boarding them was high but it had it's advantages. It was close by, was within walking distance so no need to worry about transporting three horses all at once, and they would be with others in a large pasture, so a chance for serious socialization with other horses.

The moving day was a proud one because it was the first time that Scipion and Blanchette walked from one location to another each with halter and lead.  Before this they went from one pasture to another by following the haltered pony, since they had never been halter-trained before I came along.  I was a little nervous about how it would go. Would they stay with me, would they spook and try to run away from me when  cars or tractors passed us on the small country road? To make it even trickier I had only one helper,  the daughter of a friend, Stephanie , who led the pony Negrette, while I had to handle both Blanchette and Scipion solo. Happy to say all went well and I wasn't squished like a sandwich filling between the two horses as we walked to their new location. 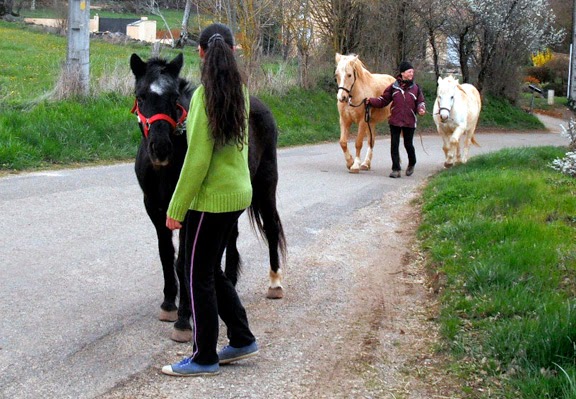 The socialization with the other horses didn't go as well as I imagined. Instead of helping them become less attached to each other it seemed to have the opposite effect...especially Blanchette who was stuck in mama mode, intent on protecting Scipion from contact with the other horses as if he were still a baby foal. I can only hope something good has come of the time they have spent there... to start to break them out of the limited experience of their past life, to prepare them for the changes to come. And it was clear that separating Scipion and Blanchette was the next big change, and a necessary one, for the further development of  them both.

The moment to make this separation came abruptly upon my return from the US because Scipion was doing badly, unable to walk on his right front foot,  hopping around on three legs trying to keep up with Blanchette and Negrette who were often moving around the large pasture to run after or to chase away the other horses. (not always clear which) Scipion had laminitis again, poor guy,  from over-eating of the rich grass that grows quickly in the pastures of this area in Spring and Autumn


The past condition of his hooves have handicapped him and made him susceptible to hoof disease. We had to get him into emergency care ASAP, and so the day was set last Monday, for Marine and David to come take him to their stable where he could be cared for and where his food intake could be strictly regulated. Because it would be 4 days of waiting before they could come to get him, I had to get anti-inflammatory medicine from the veterinarian and then construct an electric fence enclosure so that he could remain still and be medicated. I was feeling very guilty for not doing more to find a place for him to stay in April other than in a horse boarding situation where he would be put in a pasture full of rich grass. This episode of laminitis could have been avoided if he had been in a boarding stable that provided better care. And despite my efforts during the 4 days, he was no better when Marine and David came to get him.  At least it only took a half hour of training work to get him to go into the horse van.

Things are turning around for Scipion now! He is looking like a real upscale horse, being cared for like a thoroughbred at Marine and David's stable, where they work like crazy to provide the absolute best care for the horses that stay with them. They trained him to go for the first time into a stable stall where he could rest and where his food intake could b be regulated; then into one of the small pasture enclosures that they have constructed for the safety and tranquility of horses with special needs, without much barbed wire and reinforced with electric banding to ensure security, so that horses can't escape or injure themselves trying. After 3 days with such excellent care he is only limping a little. 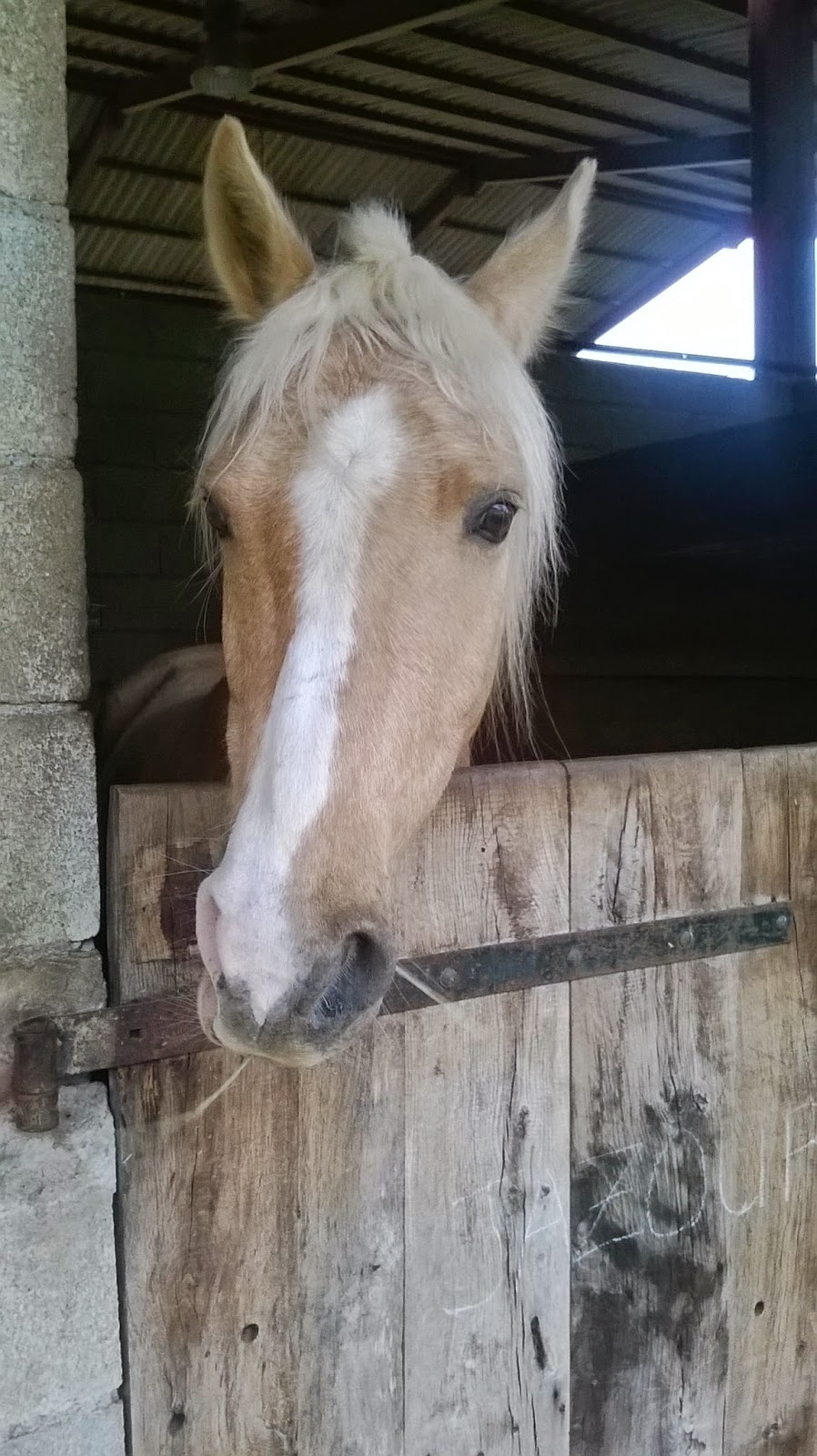 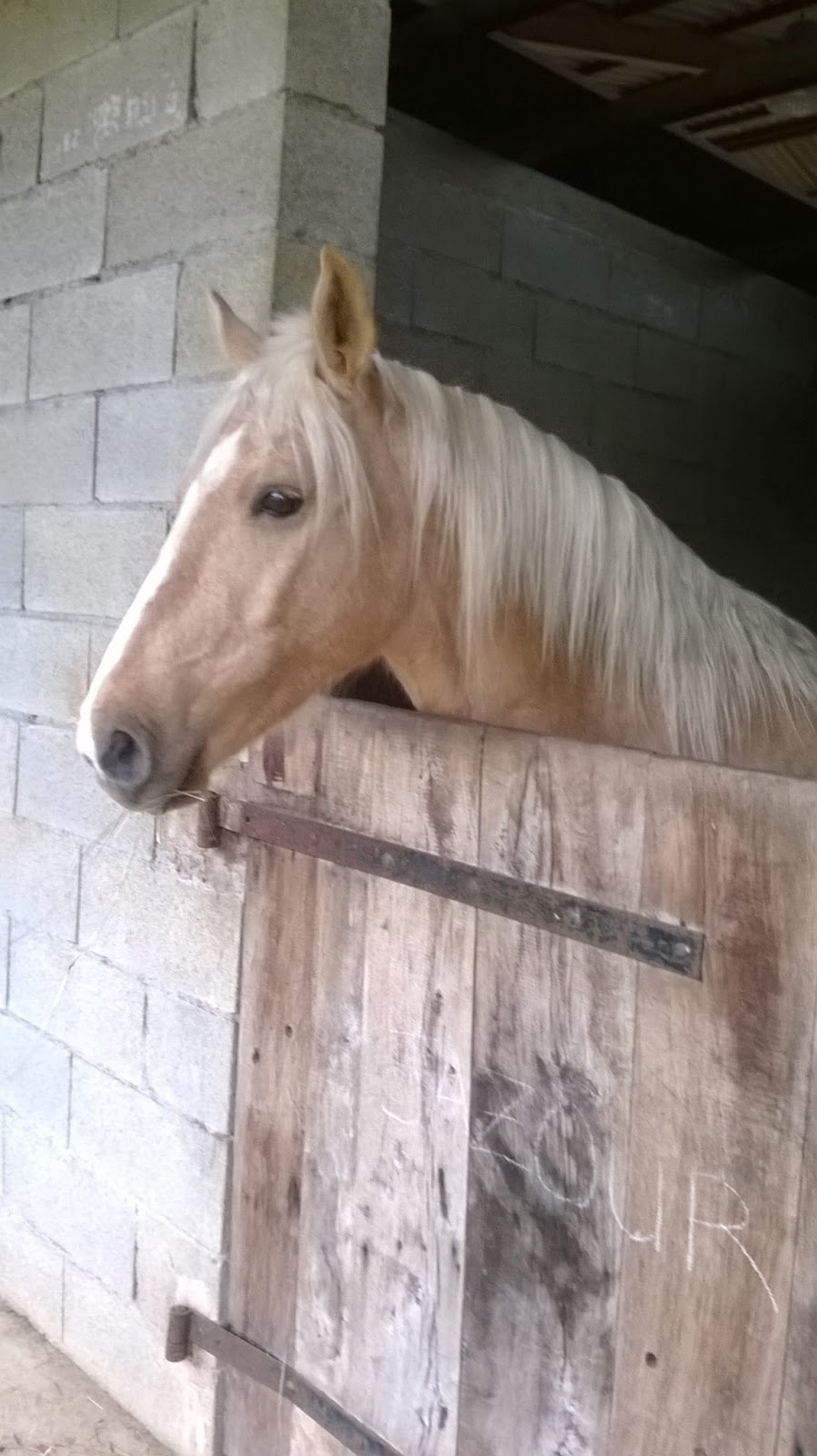 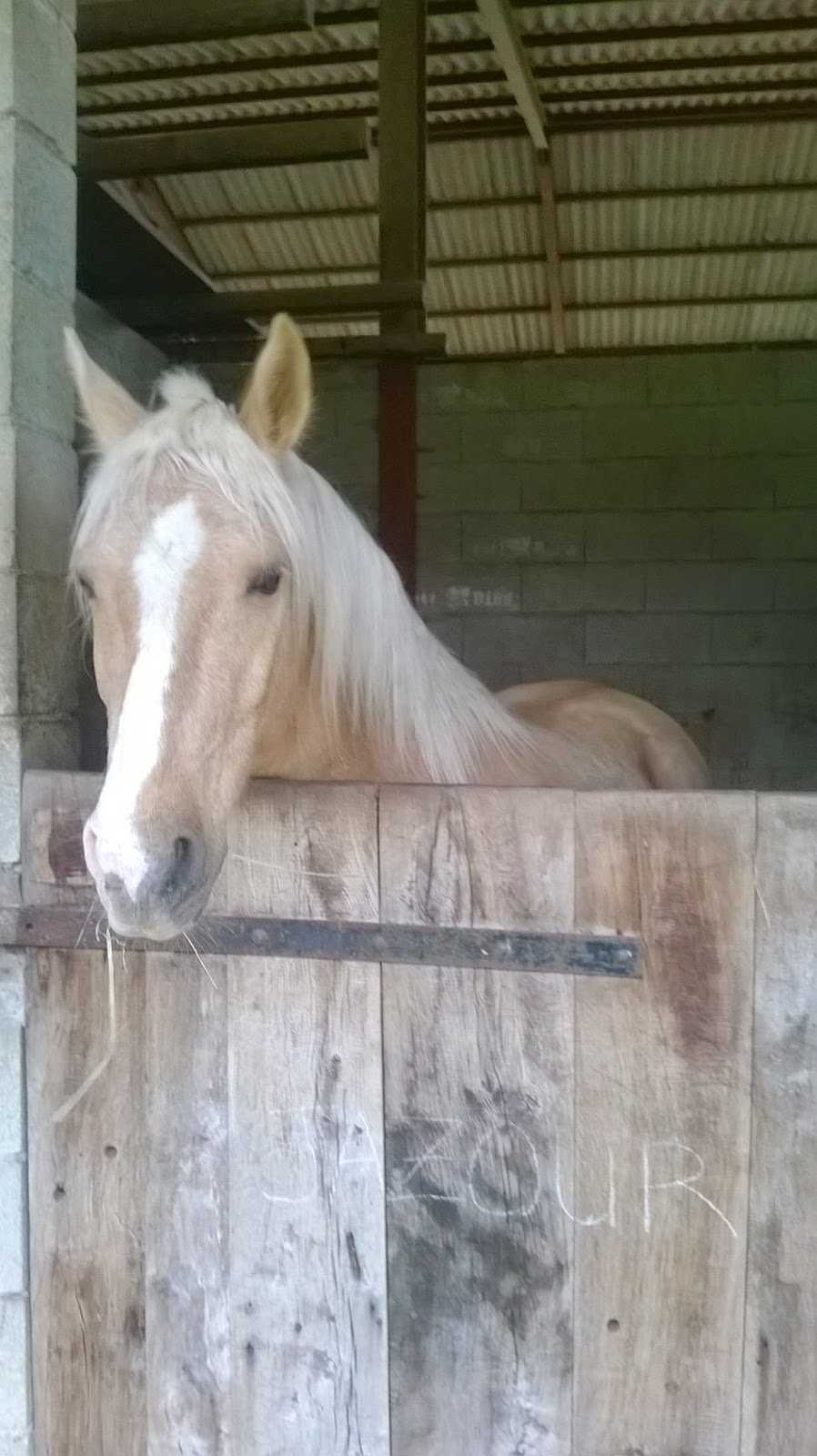 Scipion is finally in a situation where his long term health can be addressed, meaning he is  on a diet to lose weight, which will help his hoof problems immensely.  He may not like being on a diet but there's not much he can do about it in such well-controlled conditions. Before he would escaped from the pasture to find more to eat when we tried to limit his intake. But it's not all hard...at least he has a sweet mare in the next enclosure to distract him and keep him company. This is all well planned; Marine and David think of everything for the well-being of the horses at their stable. In this photo it seems he is saying, "Jeannine check out my cute neighbor".  What a flirt he is! 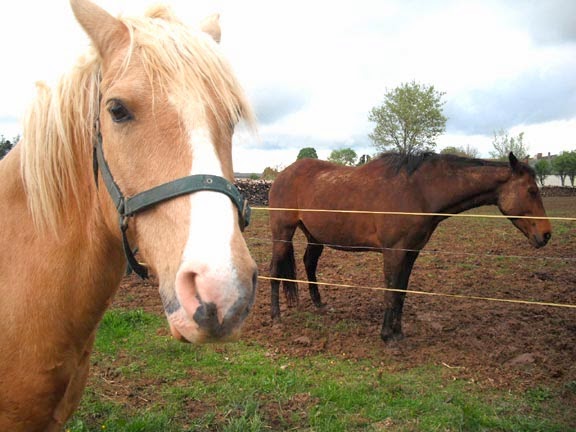 Another happy thing for Scipion's development is that he will begin to get advanced professional training.  Scipion will probably always be handicapped so that he can't be ridden for serious competitions or long treks. But hopefully he can be saddle-trained for rides of limited duration and difficulty. I think when he is saddle trained, it won't be hard to find someone very happy to give this exceptionally handsome and personable boy a permanent home. Scipion  and the others are lucky to have the support of animal lovers like you to get him this far. All of this is costly, and even though Marine and David are giving the Helping 3 Horses Association a reduced price, there's still a ways to go to raise enough money to pay for everything.  More farrier services are needed to continue the long-term rehabilitation of the hooves of all three horses. Negrette and Blanchette each also have other issues to address. More about them in the next post.

Along with this post update, I have updated the Donors/donations page and the Expenses page of the fundraising website. The numbers are: € 2036  in donations, and € 2088  in expenses so far, meaning  things are going pretty well. We are more than 2/3rds to the final goal hence the fundraising needs to continue for awhile yet....so please share and spread the word to help complete this beautiful story.
Posted by Jeannine Edelblut at 2:14 AM