So much has happened in the last two weeks. It began with a discouraging low point. Fall had arrived and Winter was coming;  we were having a weather pattern of rain followed by warm days that was causing the grass to grow just as quickly and richly as in Spring. Scipion and Blanchette were becoming even more overweight on the unlimited diet of rich pasture that the owner continued to offer to the horses. This was increasing the risk of another serious episode of laminitis, meaning more pain and damage to the hooves. The horses were showing signs of discomfort and inflammation. 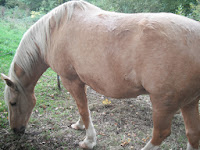 I was still operating alone and feeling discouraged about finding the help that the horses needed. Virginie had come two times for training sessions with Blanchette. These training sessions helped Blanchette learn a lot about trusting the halter and lead, but it did not solve the bigger problems of the horses’ future. I continued my search for help by putting up signs at veterinary clinics and trying to make contact with horse lovers and equine centers.

Then one of my calls led to a very helpful contact. Her name is Tamara and her horse rescue association is called  L’Assocation Marie Douce. She operates on donations for the work she does. I had spoken with her already and she gave me some advice. But when I told her about the urgent situation, and my plans for raising the money to pay the expenses for these three horses, she agreed to help. 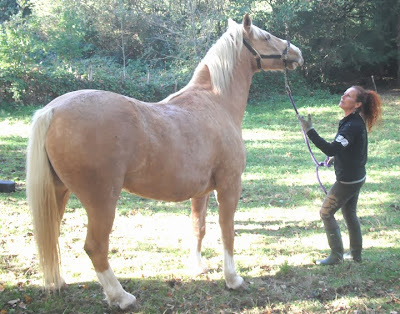 She had the advantage of being French and having experience with horse owners like this one. She contacted him, met with him and explained why these horses needed help. She convinced him it would be a good idea to turn the ownership of the horses over to a non-profit Association to facilitate the transition period. This would enable the horses to be micro-chipped in the Association's name. It is essential that they are micro-chipped because it is the law and legally they can't be adopted unless they are chipped.  This has been a sticky point since the owner will not spend the money to do it himself. 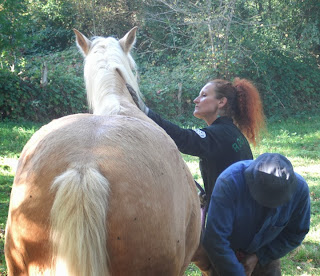 Yesterday, Tamara came with an equine veterinarian and a farrier to start immediate emergency care. The veterinarian gave them shots of  anti-inflammation and pain medication, and also sedated them so that the farrier could work on the hooves. It was very impressive to watch people who are experts on horses and how to manage them. The farrier, Bernard, along with Tamara, were fearless in the face of horses who were fighting them, trying to get away and rearing up, even with sedation. These horses have not yet been trained to give their hooves willingly.  That makes Bernard a real hero; it is rare to find a farrier who is willing or able to take on the daunting task of working on untrained horses. 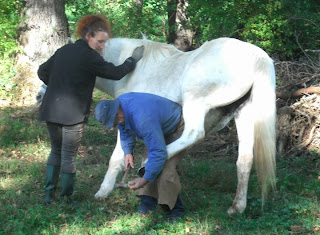 It’s not just a question of using strength and confidence to control the horses...but of using the horse whisperer techniques as well, knowing how to calm them and gain their trust. I took photos, but I didn’t manage to take any when the biggest horse, Scipion, was rearing up and trying to get away while Tamara and Bernard refused to let go of the lead and managed to hold this 1000 pound animal in place. I was too frozen in fear and amazement to take pictures in those moments, fear for Tamara and Bernard, that they would get trampled or badly kicked, and amazement that they didn’t. 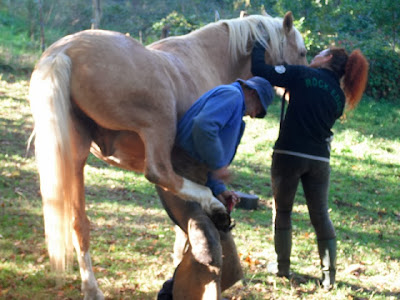 To rehabilitate the hooves back to an optimum healthy norm it would be necessary for the farrier to trim the hooves more often than is usually required. Ideally, given the money to do so, this would be once every 6 weeks for about a year, total cost of one year for 3 horses, 954 euros  ($1288).

To see before and after photos of the hooves go to the "Hooves" page of the blog.

Thank you so much for taking the time to read this story and please share with others who may be interested in helping or sharing.


Posted by Jeannine Edelblut at 2:05 AM